We believe that this new organizational structure better reflects the nature of our Company by grouping together segments with similar strategies, business drivers and operating characteristics. Our two new divisions are of similar size in terms of sales, but have different margin profiles, different strategic focus, different value drivers and different operating requirements. By organizing the Company in this way, we believe that we can manage and operate more effectively in order to accelerate the growth of our Performance Materials division and improve the profitability of our Basic Plastics & Feedstocks division. We also believe that this new organizational structure allows our investors to better understand the drivers of our business.

Commenting on the Company’s performance, Chris Pappas, Trinseo President and Chief Executive Officer, said, “We had a great start to 2015 with a very strong first quarter. We had record Adjusted EBITDA excluding inventory revaluation at the consolidated level, and in our Basic Plastics & Feedstocks division. In addition, we had record Adjusted EBITDA in the Performance Plastics segment. We are now seeing the strength of our consistent EBITDA in the Performance Materials division coupled with the cyclical lift in the Basic Plastics & Feedstocks division.”

Pappas continued, “We recently refinanced our debt, creating a new capital structure that is consistent with our public company peers and which provides us with increased liquidity, a natural hedge against our euro-denominated EBITDA, and a much lower cost of borrowing, which will positively contribute to our earnings and free cash flow. At current interest rates, the transaction will reduce our cash interest by approximately $37 million per year, which equals approximately sixty-five cents of earnings per diluted share.”

Revenue in the first quarter decreased 25% versus prior year and 9% versus prior quarter due to the pass through of lower raw material cost, with the significant decline in the overall energy complex, and currency, as the euro weakened in comparison to the U.S. dollar. These impacts were partially offset by an increase in sales volume across all of our segments, which was aided by customer restocking in the current quarter after a period of destocking in the latter part of 2014.

First quarter Adjusted EBITDA of $109 million included a $42 million unfavorable impact from inventory revaluation. Adjusted EBITDA excluding inventory revaluation of $151 million was $68 million higher than prior year and $47 million higher than prior quarter. These increases were due mainly to higher margins in polycarbonate, from our restructuring efforts and market improvement, higher margins in Performance Plastics, due to declining raw material costs during the quarter, and improved performance in styrene monomer, styrenic polymers, and at Americas Styrenics driven by first quarter industry restocking and overall stronger market conditions ahead of planned outages.

Free cash flow for the quarter was $16 million, which included $52 million of net cash interest payments, $28 million of capital expenditures, and $15 million of dividends received from Americas Styrenics. This is the first time in the company’s historywith positive free cash flow in a first quarter, as strong performance and declining raw material prices outweighed a working capital build due to seasonality and second quarter turnarounds. First quarter ending liquidity was $658 million.

Commenting on the second quarter and full year 2015 outlook Pappas said, “We expect continued strong performance with higher Adjusted EBITDA and EPS in the second quarter versus the first quarter. The Basic Plastics & Feedstocks division should see similar performance, quarter over quarter, while there will be some headwinds in the Performance Materials division from a second quarter planned outage in Synthetic Rubber as well as from increasing raw material costs and price lag effects.”

Regarding the outlook for full year 2015 Pappas continued, “We expect significant improvement in 2015 versus 2014 in EBITDA, EPS and cash flow as we build on the momentum of the first quarter results and our recent refinancing.”

Trinseo will host a conference call to discuss its first quarter 2015 financial results tomorrow,Wednesday, May 6, 2015 at 10 AM Eastern Time.

Trinseo has posted its first quarter 2015 financial results on the Company’s Investor Relations website. The presentation slides will also be made available in the webcast player prior to the conference call. The Company will also furnish copies of the financial results press release and presentation slides to investors bymeans of a Form 8-K filing with the U.S. Securities and Exchange Commission (SEC). 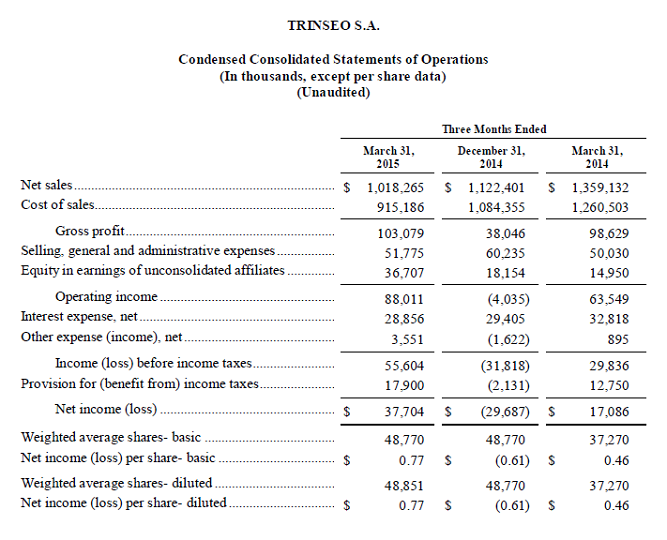 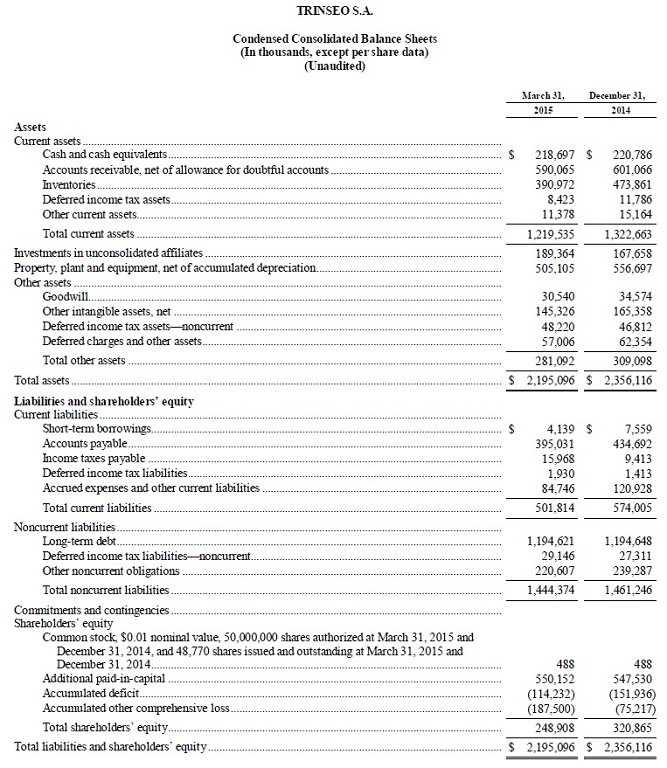 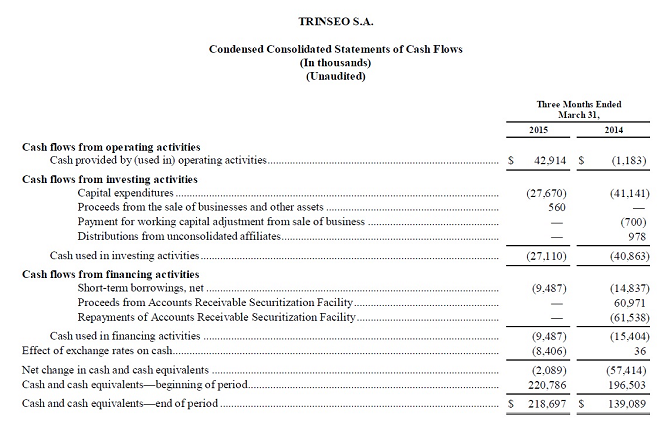 EBITDA is a non-GAAP financial measure that we refer to in making operating decisions because we believe it provides meaningful supplemental information regarding the Company’s operational performance.We present EBITDA because we believe that it is useful for investors to analyze disclosures of our operating results on the same basis as that used by our management. We believe the use of EBITDA as a metric assists our board of directors, management and investors in comparing our operating performance on a consistent basis because it removes the impact of our capital structure (such as interest expense), asset base (such as depreciation and amortization) and tax structure.

We present Adjusted EBITDA excluding inventory revaluation in order to facilitate the comparability of results from period to period by adjusting cost of sales to reflect the cost of raw materials during the period, which is often referred to as the replacement cost method of inventory valuation.We believe this measure minimizes the impact of raw material purchase price volatility in evaluating our performance. Our approach to calculating inventory revaluation is intended to represent the difference between the results under the FIFO and the replacement cost methods. However, our calculation could differ from the replacement cost method if the monthly raw material standards are different from the actual raw material prices during the month and production and purchase volumes differ from sales volumes during the month. These factors could have a significant impact on the inventory revaluation calculation. 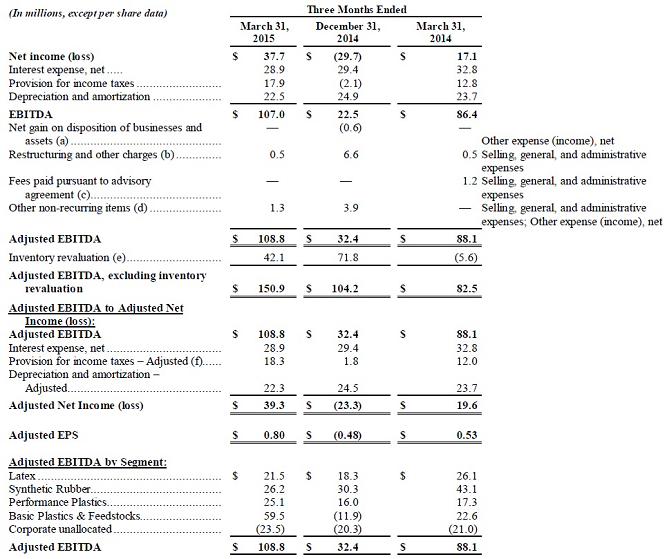 (a) Net gain on disposition of businesses and assets for the three months ended December 31, 2014 of $(0.6) million relates to the sale of the Company’s EPS business, which closed in September 2013, and for which a contingent gain of $0.6 million was recorded during the fourth quarter of 2014.
(b) Restructuring and other charges for the three month periods above were incurred primarily in connection with the polycarbonate restructuring within our Basic Plastics & Feedstocks segment and the shutdown of our latex manufacturing plant in Altona, Australia. Specifically, during the three months ended December 31, 2014, we incurred $6.6 million in charges for decommissioning and demolition costs at the Freeport, Texas facility related to our polycarbonate restructuring.
(c) Represents fees paid under the terms of our advisory agreement with Bain Capital, before its termination in conjunction with our June 2014 initial public offering.
(d) Other non-recurring items incurred for the three months ended March 31, 2015 and December 31, 2014 include costs related to the process of changing our corporate name from Styron to Trinseo, as well as severance charges incurred in conjunction with the employment termination of certain key employees.
(e) See the discussion above this table for a description of inventory revaluation.
(f) Adjusted to remove the tax impact of the related items noted above in (a) – (d). Additionally, the three months ended December 31, 2014 excludes a $0.6 million tax benefit recognized due to the release of a reserve for an uncertain tax position. The three months ended March 31, 2014 excludes the impact of a $1.0 million valuation allowance recognized in Greece related to the cumulative prior year results.

Free Cash Flow and Liquidity are not intended to represent cash flows from operations as defined by GAAP, and therefore, should not be used as an alternative for that measure. Other companies in our industrymay define Free Cash Flow and Liquidity differently than we do. As a result, it may be difficult to use these or similarly-named financial measures that other companies may use, to compare the performance of those companies to our performance. The Company compensates for these limitations by providing the following detail, which is determined in accordance with GAAP and the terms of related borrowing agreements. 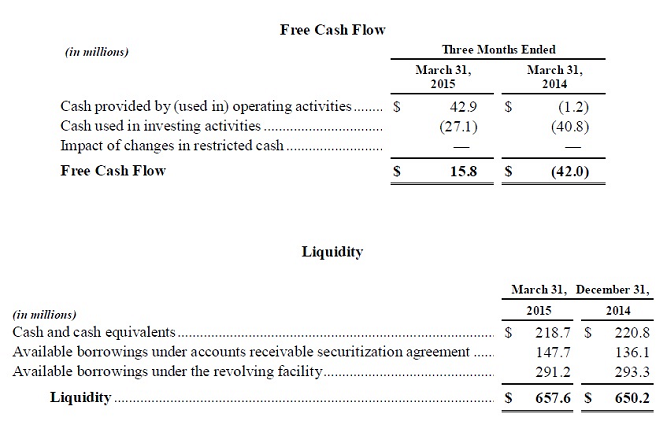