Commenting on the Company’s performance, Chris Pappas, Trinseo President and Chief Executive Officer, said, “After a very strong first half, Trinseo continued with strong results in the third quarter. We had net income of $52 million and earnings per diluted share of $1.06. Adjusted EBITDA excluding inventory revaluation of $144 million in the third quarter was our second highest ever, and we had very strong free cash flow of $95 million.”

Pappas continued, “As expected, Performance Materials Adjusted EBITDA excluding inventory revaluation returned to a more normalized run rate at $72 million. We continue to be encouraged by the results in Basic Plastics & Feedstocks, which had Adjusted EBITDA excluding inventory revaluation of $93 million, making this the third straight quarter with Adjusted EBITDA higher than all of 2014. We are seeing further evidence of the supply / demand improvements driving higher margins in styrene monomer, polystyrene, and polycarbonate.”

Revenue in the third quarter decreased 21% versus prior year due to the pass through of lower raw material costs, with the significant decline in the overall energy complex, and currency, as the euro weakened in comparison to the U.S. dollar.  Sequentially, revenue remained flat.

Free cash flow for the quarter was $95 million, inclusive of a $42.5 million dividend from Americas Styrenics, $35 million of capital spending, and $10 million of cash interest payments.  Net leverage continued to decrease due to higher EBITDA and cash generation, and was 2.2 times as of the end of the third quarter, compared to approximately 4.0 times at the end of 2013 and 2014.

Commenting on the outlook for the fourth quarter of 2015 Pappas said, “The Performance Materials division Adjusted EBITDA is expected to remain between $70 and $75 million. In Basic Plastics & Feedstocks, we expect the fourth quarter Adjusted EBITDA to be between $55 and $65 million. This decrease from the third quarter is driven by lower styrene margins in Europe and Asia as well as lower income from Americas Styrenics.”

Pappas continued, “We expect full year Adjusted EBITDA to be between $485 and $495 million, a record for Trinseo. In addition, we expect record free cash flow of $270 to $290 million, excluding the $69 million call premium related to the refinancing in the second quarter, and record Adjusted EPS of $4.50 to $4.70.”

Trinseo will host a conference call to discuss its Third Quarter 2015 financial results tomorrow, Thursday, November 5, 2015 at 10 AM Eastern Time.

Trinseo has posted its Third Quarter 2015 financial results on the Company’s Investor Relations website on Wednesday, November 4, 2015 after the market close. The presentation slides will also be made available in the webcast player prior to the conference call. The Company will also furnish copies of the financial results press release and presentation slides to investors by means of a Form 8-K filing with the U.S. Securities and Exchange Commission. 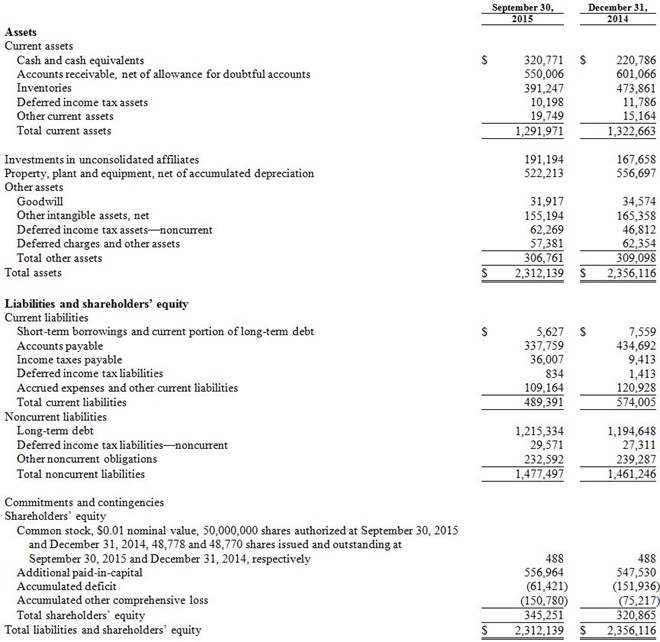 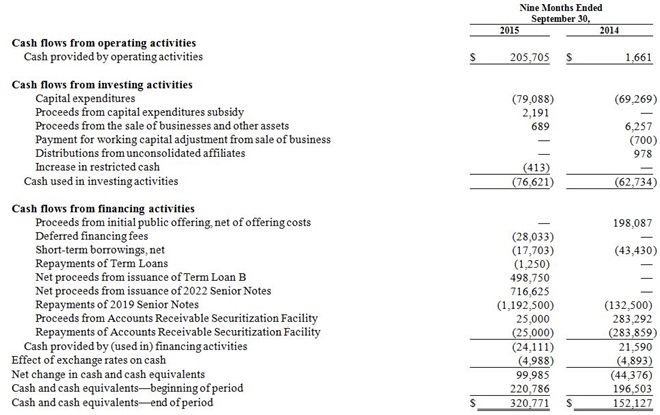 (a) Restructuring and other charges for the prior three month periods above were incurred primarily in connection with the shutdown of our latex manufacturing plant in Altona, Australia.  Charges incurred during the three months ended September 30, 2015 are related to the planned closure of our Allyn’s Point latex manufacturing facility in Gales Ferry, Connecticut.

(b) Other non-recurring items incurred include costs related to the process of changing our corporate name from Styron to Trinseo.

(c) See the discussion above this table for a description of inventory revaluation.

(d) Adjusted to remove the tax impact of the loss on extinguishment of long-term debt and the related items noted above in (a) - (b). Additionally, the three monthsended September 30, 2015 excludes a $0.6 million tax benefit recognized during the period related to provision to return adjustments.

Trinseo is a leading global materials company and manufacturer of plastics, latex and rubber, dedicated to collaborating with customers to deliver innovative and sustainable solutions. Trinseo’s technology is used by customers in industries such as home appliances, automotive, building & construction, carpet, consumer electronics, consumer goods, electrical & lighting, medical, packaging, paper & paperboard, rubber goods and tires. Trinseo had approximately $5.1 billion in revenue in 2014, with 19 manufacturing sites around the world, and approximately 2,100 employees. More information can be found on Trinseo’s website. Formerly known as Styron, Trinseo completed its renaming process in the first quarter of 2015.

This press release may contain “forward-looking statements” within the meaning of the safe harbor provisions of the United States Private Securities Litigation Reform Act of 1995. Words such as “expect,” “estimate,” “project,” “budget,” “forecast,” “anticipate,” “intend,” “plan,” “may,” “will,” “could,” “should,” “believes,” “predicts,” “potential,” “continue,” and similar expressions are intended to identify such forward-looking statements. Forward-looking statements in this press release may include, without limitation, forecasts of growth, revenues, business activity, acquisitions, financings and other matters that involve known and unknown risks, uncertainties and other factors that may cause results, levels of activity, performance or achievements to differ materially from results expressed or implied by this press release. Such risk factors include, among others: conditions in the global economy and capital markets, volatility in costs or disruption in the supply of the raw materials utilized for our products; loss of market share to other producers of styrene-based chemical products; compliance with environmental, health and safety laws; changes in laws and regulations applicable to our business; our inability to continue technological innovation and successful introduction of new products; system security risk issues that could disrupt our internal operations or information technology services; and the loss of customers. Additional risks and uncertainties are set forth in the Company’s reports filed with the United States Securities and Exchange Commission, which are available at http://www.sec.gov/ as well as the Company’s web site at http://www.trinseo.com. As a result of the foregoing considerations, you are cautioned not to place undue reliance on these forward-looking statements, which speak only as of the date of this press release. All forward-looking statements are qualified in their entirety by this cautionary statement. The Company undertakes no obligation to publicly update or revise any forward-looking statements, whether as a result of new information, future events or otherwise.