Environmental regulations and voluntary commitments to reduce greenhouse gasses are a major driver of innovation in tires. Because road transport contributes up to 20 percent of total CO2 emissions in the EU1 and other developed regions, addressing the efficiency of cars will be critical to addressing greenhouse gas emissions and climate change.

Advancements in low rolling resistance tires (LRRTs) will significantly contribute to improving fuel efficiency and reducing CO2 emissions. And there is an estimated 10 percent difference1 in fuel consumption between the worst-performing tires, produced with non-functionalized Styrene Butadiene Rubber and those with the latest commercialized generations of functionalized S-SBR.

Regulators around the world are creating incentives for manufacturers and consumers to shift toward performance tires. The European Union (EU) was the first to set standards for tires and require labels to educate consumers about their options in choosing tires.

Starting in 2012, all tires sold in the EU were required to be labeled with ratings on a letter scale (A-E) on three measures: wet grip, noise, and rolling resistance. Other countries have followed suit including Japan (voluntary labeling since 2010) and China (voluntary labeling in 2017; mandatory by 2019).

Beyond labeling, regulations are mandating that vehicles reduce their CO2 emissions. The EU also has mandated a 20 percent CO2 reduction for passenger cars in Europe by 2020 (vs. 1999 baseline).2 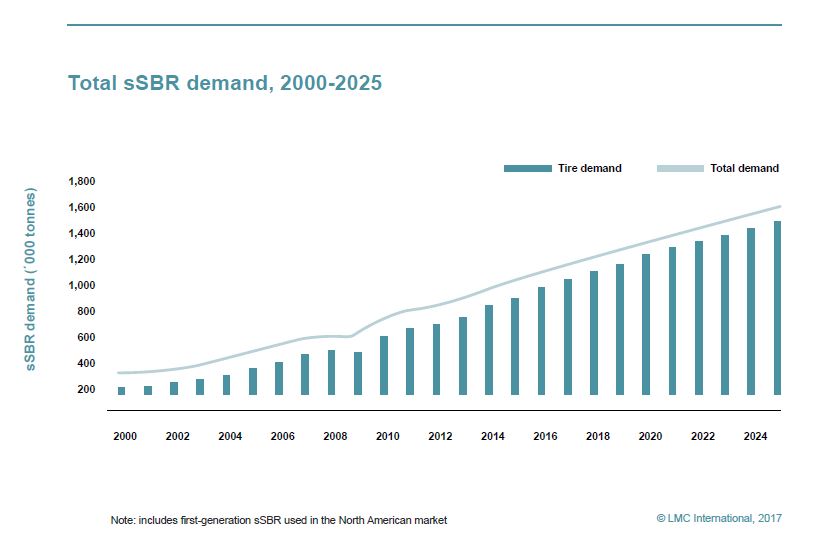 Sustainability is top of mind for automakers around the world. As customers shift their preferences to tires with better properties, the Performance Tire market is growing at a compound annual growth rate of 7-8 percent, while the market for standard tires has remained relatively flat.3

You can learn more in “Science and Technology: Catalysts for Tires of the Future,” our white paper covering the application of synthetic rubber in performance tires. This article is Part Two of a three-part series. Read Part One and Part Three.