Commenting on the Company’s performance, Chris Pappas, Trinseo President and Chief Executive Officer, said, “Trinseo had a great start to 2015 with very strong first and second quarter results. In the second quarter we had record Adjusted EBITDA at the total company level as well as in the Basic Plastics & Feedstocks segment. In addition, we had record Adjusted Net Income.”

Pappas continued, “In the Performance Materials division, second quarter EBITDA was below the first quarter, as expected, and was impacted by several factors, including a planned turnaround at our Synthetic Rubber plant as well as negative price lag with increasing raw material costs. However, we feel that the combined first half results for Performance Materials are indicative of the run-rate that we expect for this division. In Basic Plastics & Feedstocks, we continue to be encouraged by the positive results as they are further evidence of the supply / demand improvements that are driving higher operating rates and margins in styrene monomer, polystyrene, and in polycarbonate.”

Revenue in the second quarter decreased 23% versus prior year due to the pass through of lower raw material costs, with the significant decline in the overall energy complex, and currency, as the euro weakened in comparison to the U.S. dollar. These impacts were partially offset by an increase in sales volume in the Latex, Synthetic Rubber, and Performance Plastics segments, consistent with our strategy of focusing on growth in the Performance Materials Division. Sequentially, revenue increased 1% as the pass through of higher raw material costs was mostly offset by currency and lower sales volume. The decrease in sales volume was driven by lower sales of styrene monomer, due to a higher level of opportunistic sales in the first quarter, as well as lower sales of polystyrene in Europe, due to customer destocking in the second quarter as a result of increasing prices.

Second quarter Adjusted EBITDA of $151 million included a $29 million favorable impact from inventory revaluation. Adjusted EBITDA excluding inventory revaluation of $122 million was $45 million higher than prior year primarily due to higher margins in the Basic Plastics & Feedstocks segment, including styrene monomer, styrenic polymers, and polycarbonate, as well as higher equity earnings from Americas Styrenics. Sequentially, Adjusted EBITDA excluding inventory revaluation was $29 million lower than the record-high first quarter due mostly to the planned Synthetic Rubber turnaround in the second quarter as well as price lag, which had a positive impact on the first quarter and a negative impact on the second quarter. These impacts were partially offset by higher margins in Basic Plastics & Feedstocks as well as an increase in equity earnings from Americas Styrenics.

Free cash flow for the quarter was $18 million, inclusive of a record $30 million dividend from Americas Styrenics, $14 million of capital spending, $69 million related to the call premium associated with the retirement of our long-term bonds, and $31 million of cash interest. Excluding the call premium, free cash flow was very strong at $87 million. Our net leverage continued to decrease due to higher EBITDA and cash generation, and was 2.8 times as of the end of the second quarter compared to approximately 4.0 times at the end of 2013 and 2014.

Commenting on the outlook for the remainder of 2015 Pappas said, “We expect the Performance Materials division results to return to the run rate of $70 million to $75 million Adjusted EBITDA per quarter, as we don’t expect significant price lag and do not have any material maintenance events for the remainder of the year. In Basic Plastics & Feedstocks, we expect Adjusted EBITDA for the second half of the year to be approximately $130 million to $145 million, due primarily to lower, but still historically strong, styrene margins for both our business as well as that of Americas Styrenics.”

Pappas continued, “Given these expectations, full year Adjusted EBITDA should be between $490 million and $505 million. In addition, we expect strong free cash flow and EPS performance on the back of our refinancing, management of capex and lower interest expense.”

Trinseo will host a conference call to discuss its Second Quarter 2015 financial results tomorrow, Wednesday, August 5, 2015 at 10 AM Eastern Time.

Trinseo has posted its Second Quarter 2015 financial results on the Company’s Investor Relations website. The presentation slides will also be made available in the webcast player prior to the conference call. The Company will also furnish copies of the financial results press release and presentation slides to investors by means of a Form 8-K filing with the U.S. Securities and Exchange Commission (SEC). 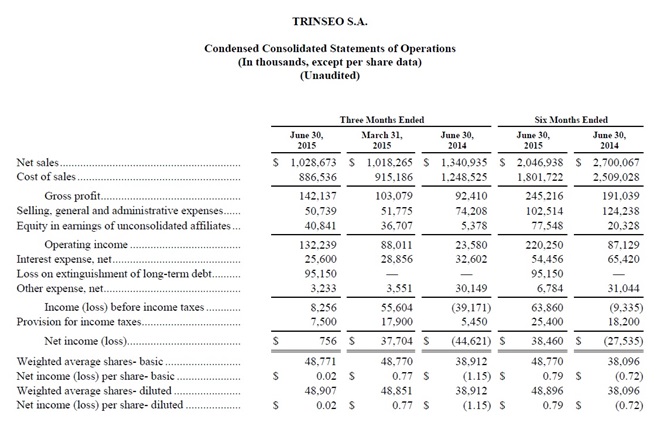 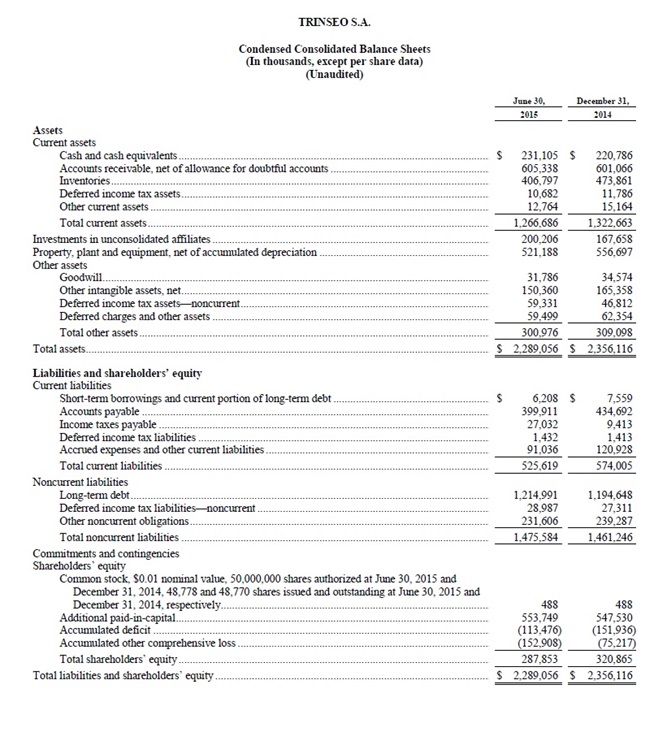 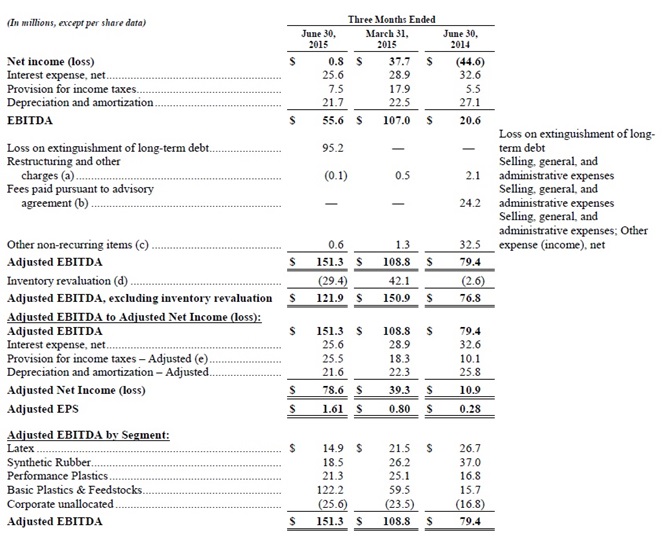 (a) Restructuring and other charges for the three month periods above were incurred primarily in connection with the polycarbonate restructuring within our Basic Plastics & Feedstocks segment and the shutdown of our latex manufacturing plant in Altona, Australia.


(b) Represents fees paid under the terms of our advisory agreement with Bain Capital, before its termination in conjunction with our June 2014 initial public offering. For the three months ended June 30, 2014, this includes a charge of $23.3 million for fees incurred in connection with said termination.

(c) Other non-recurring items incurred for the three months ended June 30, 2015 and March 31, 2015 include costs related to the process of changing our corporate name from Styron to Trinseo. For the three months ended June 30, 2014, these costs include a one-time $32.5 million termination payment made to Dow in connection with the termination of our Latex JV Option Agreement.

(d) See the discussion above this table for a description of inventory revaluation.

(e) Adjusted to remove the tax impact of the loss on extinguishment of long-term debt and the related items noted above in (a) – (c). Additionally, the three months ended June 30, 2014 excludes a $2.7 million tax benefit recognized during the period related to a previously unrecognized tax benefit, resulting from the effective settlement of a 2010 and 2011 audit with the IRS. 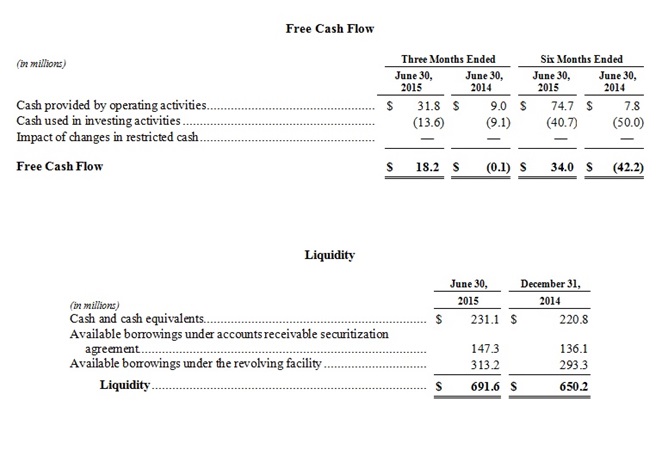